Over the years, the notion of Corporate Social Responsibility (CSR) as it applies to the lottery sector has become much broader. Lotteries are increasingly looking beyond responsible gaming to assess their impact on the environment and the well-being of their employees and their communities at large. The WLA recently ran a survey of its members to gain insight into the priorities of their CSR programs and better understand how they are addressing the responsibility issues that fall outside the strict definition of responsible gaming. 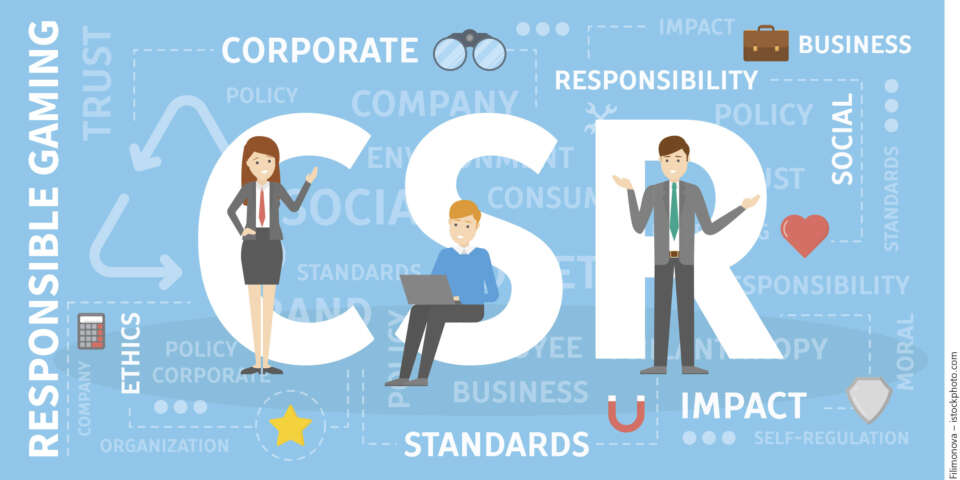 The WLA has always been committed to supporting its member lotteries in their efforts to operate in a socially responsible way, primarily through the WLA Responsible Gaming Framework (WLA-RGF). The WLA also recognizes that CSR should ideally cover every aspect of a lottery’s activities and govern its relationships with all its stakeholders. Lotteries increasingly need to provide material evidence that the moral and ethical values underpinning their operations are based on sustainable economic, environmental, and social performance goals.

In July 2020, the WLA Responsible Gaming working group was mandated by the WLA Corporate Social Responsibility Committee to conduct a survey of WLA member lotteries in order to better understand how their approach to CSR fits into this broader context. The survey will help the WLA develop a more holistic CSR program as member lotteries move beyond responsible gaming.

The survey questions were designed to determine the scope of the member lotteries' existing CSR programs beyond responsible gaming, and aspects such as program maturity, governance models, and the framework used to guide their CSR initiatives. Around one-third of WLA member lotteries responded to the survey. 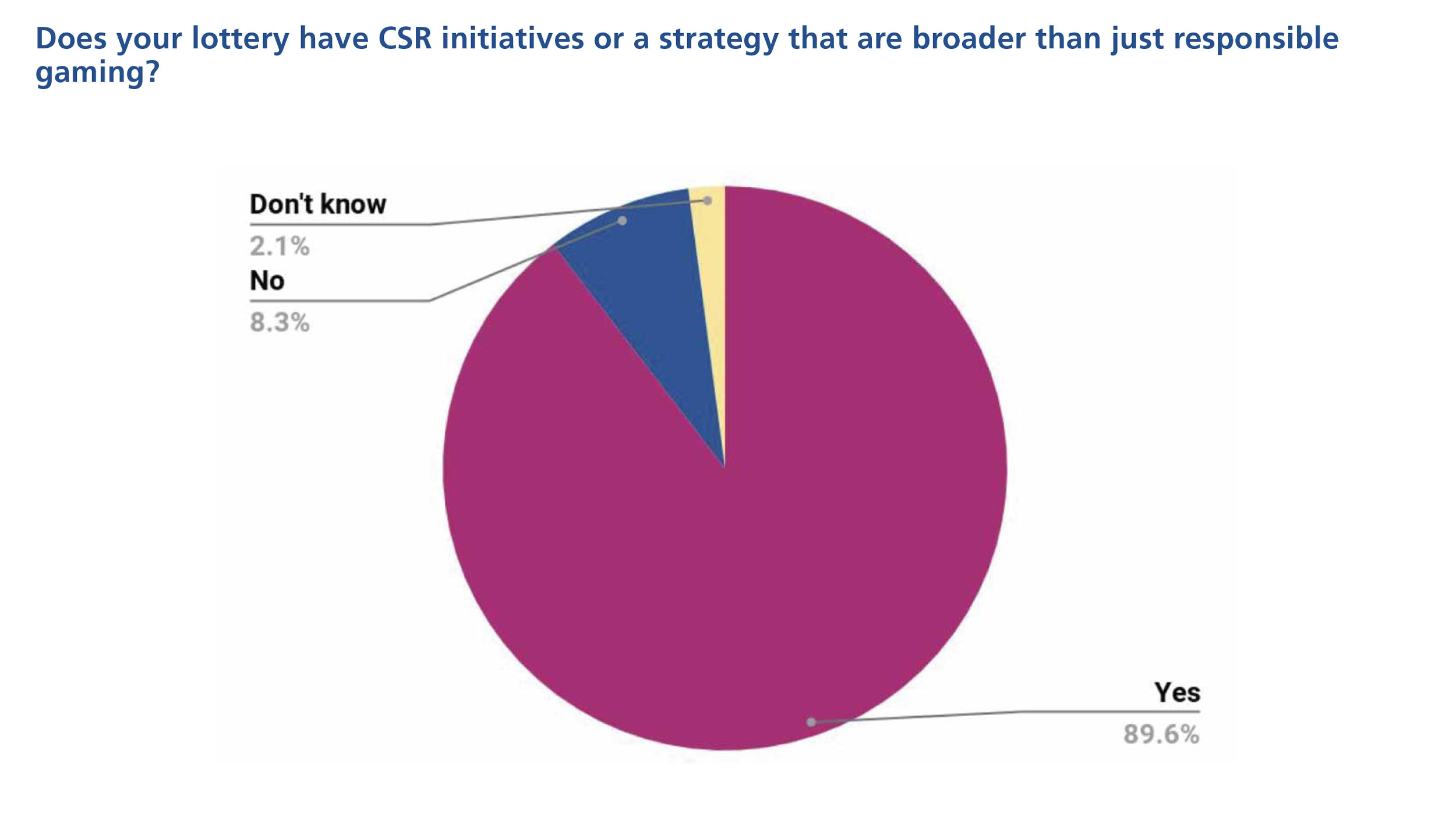 Around 90% of the lotteries that responded say they maintain CSR initiatives that go beyond responsible gaming.

Respondents were asked to indicate which department is responsible for CSR at their respective lotteries. These answers offer insight into where CSR is integrated within each organization and how each organization might prioritize its CSR initiatives. Around one-third of the respondents (29%) revealed that their marketing and communications departments are responsible for CSR. About 21% of the respondents indicated that their CSR programs are run by their legal or compliance departments, with corporate affairs departments accounting for a further 20%. The remaining 17% of respondents listed other departments, ranging from public affairs and public information to development and transformation, and even security. 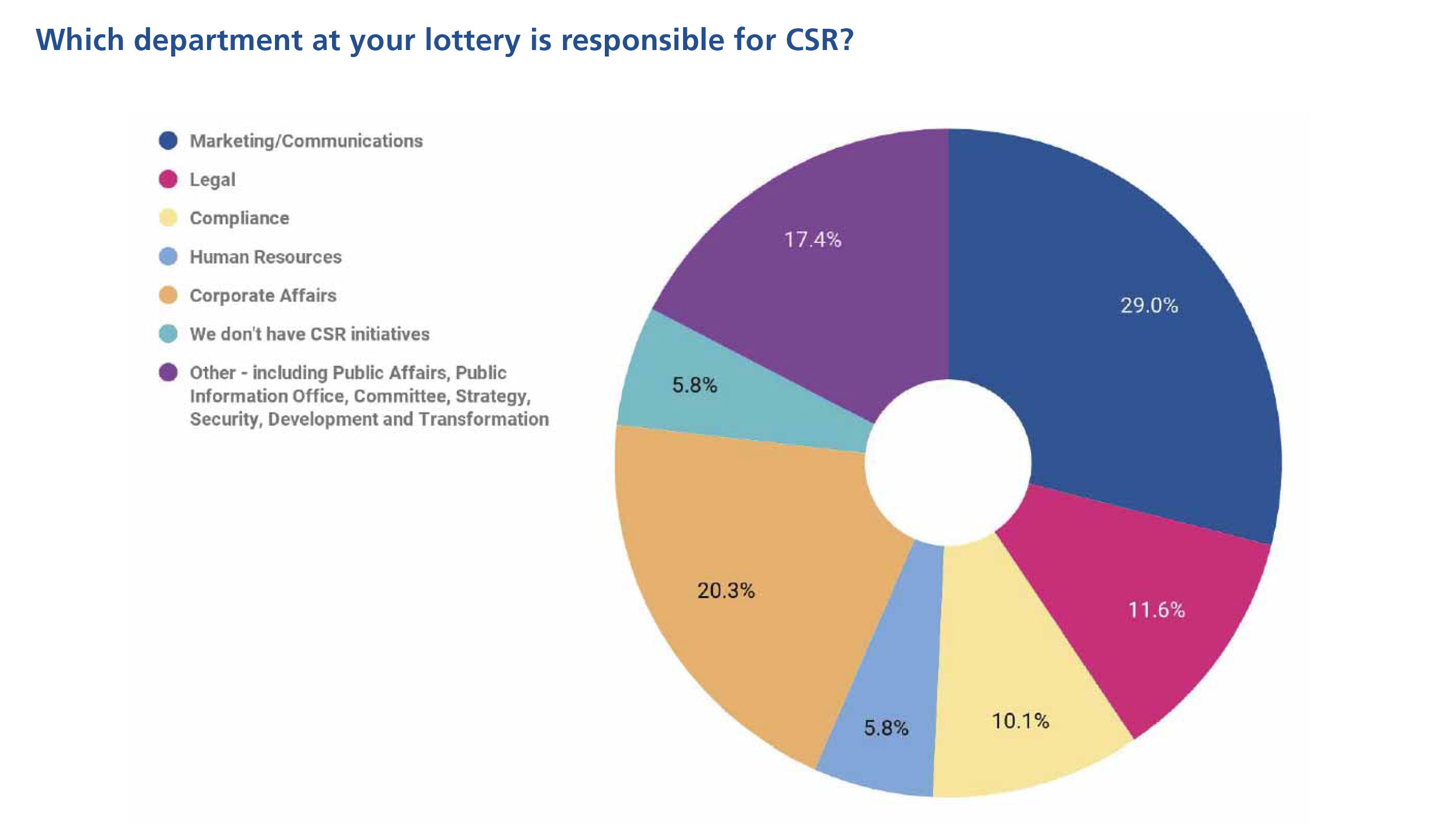 Around one-third of the respondents (29%) revealed that their marketing and communications departments are responsible for CSR.

The importance of a structured framework

The WLA survey also sought to understand which frameworks lotteries use to structure their CSR initiatives. According the answers received, 36% of lotteries use a global framework or standard (UN Global Compact, UN Sustainable Development Goals, Global Reporting Initiative, or ISO 26000). More than 23% of lotteries rely on their respective governments' frameworks or directives, and a significant number indicated that they implement their company’s own framework. Another 23% do not use a framework at all. It is interesting to learn that there is not one framework that is being extensively used across WLA member lotteries, which may point a need for an industry-wide alignment in this regard. 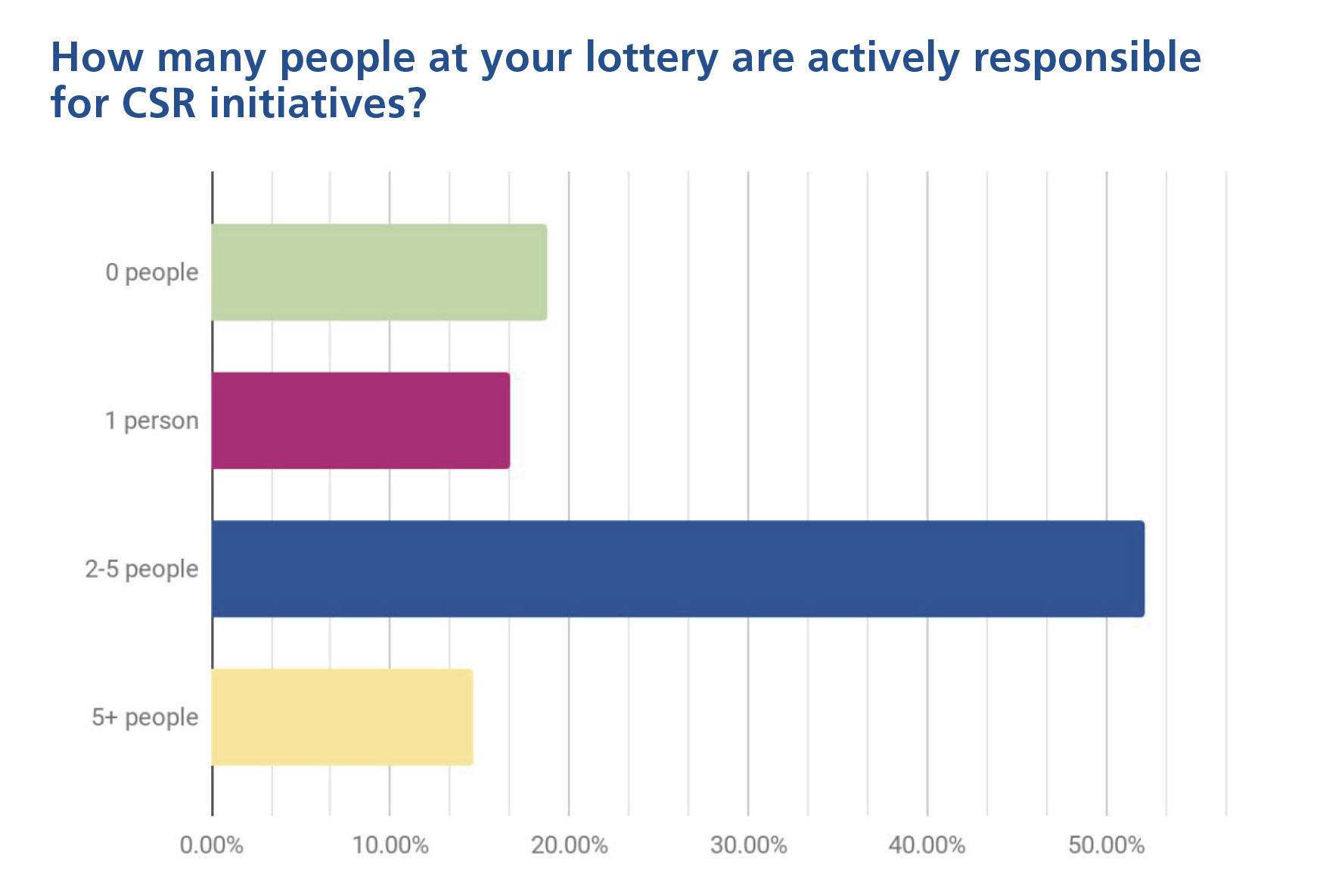 More than half of the respondents (52%) said that their organizations have a team of two to five people dedicated to CSR.

Finally, survey respondents were asked to indicate the areas of CSR, beyond responsible gaming, in which their lotteries are currently active.

According to the responses, protecting consumers' health and safety, personal data and privacy is an area of active involvement for 54% of the respondents, suggesting that most lotteries are doing substantial work in this area. This was followed by community support, with 50%, and business operations – including anti-corruption and supply chain integrity – also with 50%. About 40% of respondents said that their lotteries are also doing substantial work to develop their people and to promote diversity and inclusion. However, only slightly more than 30% of respondents indicated that their lotteries were particularly active in societal issues such as job creation and skills development, although almost 50% of lotteries do appear to be involved in these initiatives to a lesser extent.

Perhaps surprisingly, the environment is the area of CSR that appears to be the subject of least focus among lotteries. Almost 30% of respondents reported that their lotteries were not doing any active work in this area, and only a small percentage (15%) indicated that they were actively working on environmental issues. Close to 60% of respondents indicated that they were doing "some work" in this area, but the relatively low percentage of respondents saying that their lotteries were doing "a lot of active work" on environmental issues suggests that this is an area that could merit closer attention going forward. 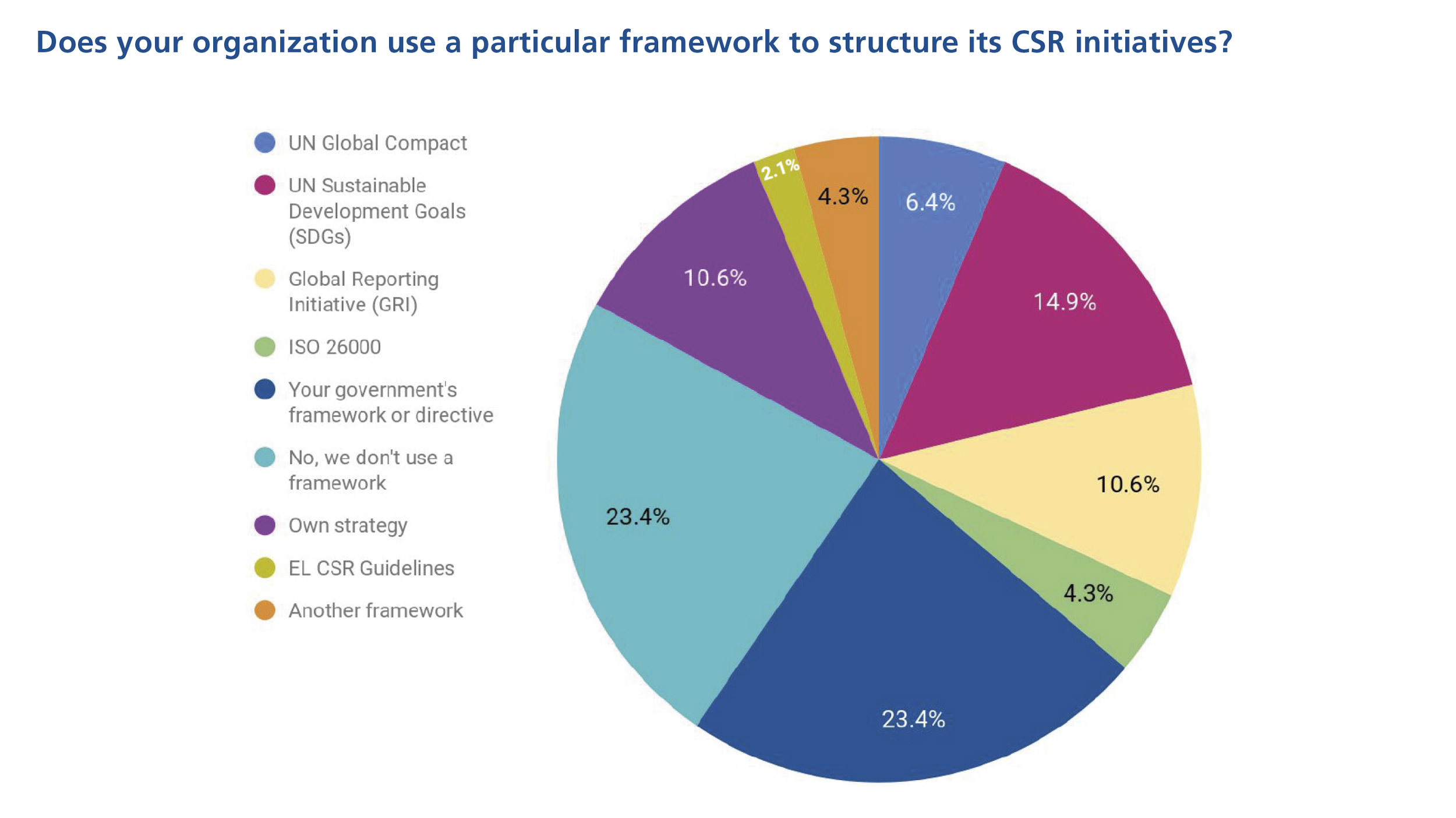 The WLA Corporate Social Responsibility Committee and Responsible Gaming working group thank member lotteries for taking part in this operation. Although a 30% response rate could be considered rather low, the survey does provide encouraging signs that WLA member lotteries have a perception of CSR that goes well beyond a strict definition of responsible gaming. With the knowledge gained through this survey, the WLA now has a roadmap for the further development of its own CSR program, and will continue to work with members to take CSR to the next level industry-wide. 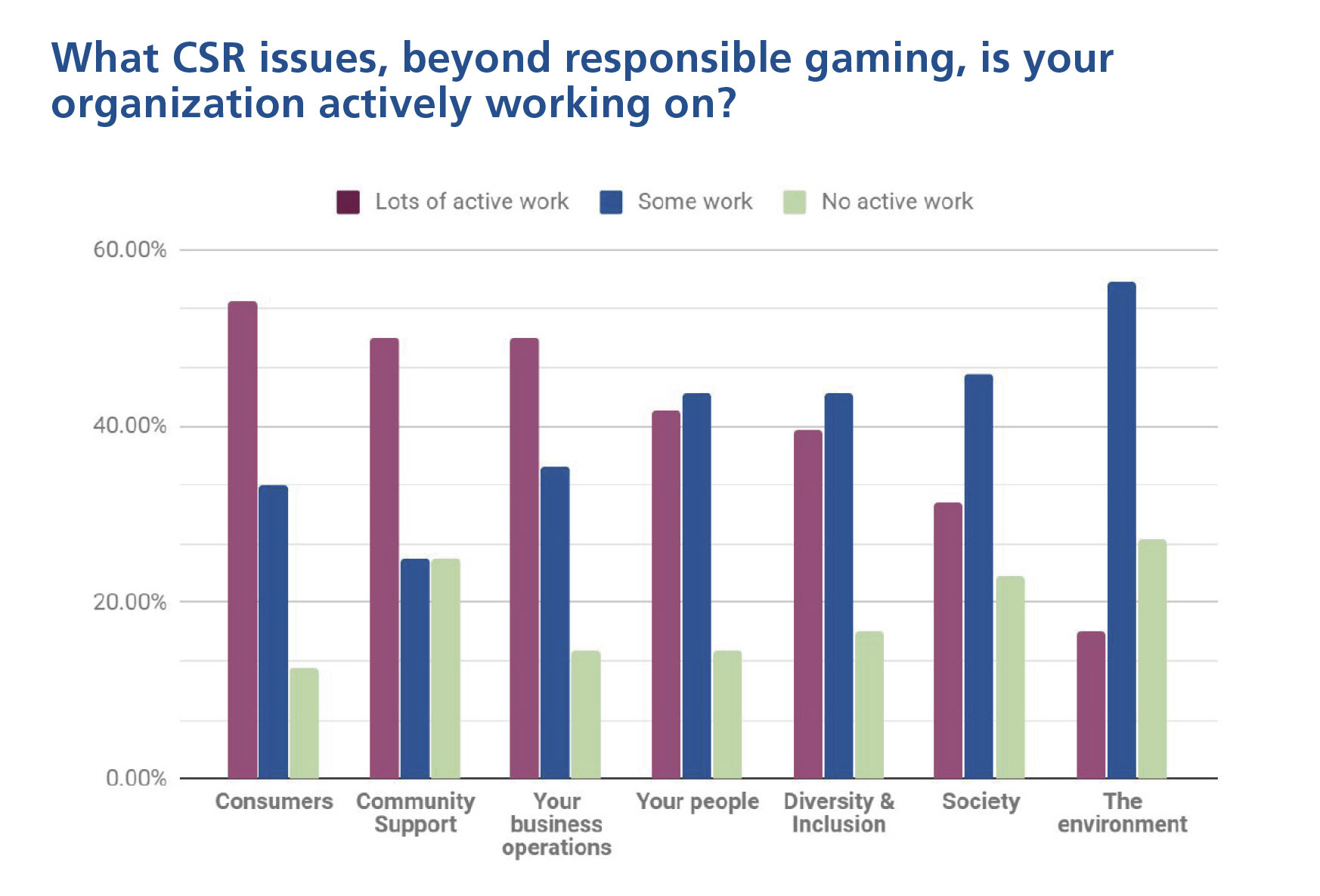 Protecting consumers' health and safety, personal data and privacy is an area of active involvement for 54% of the respondents. However, only a small percentage of respondents (15%) indicated that they were actively working on environmental issues. 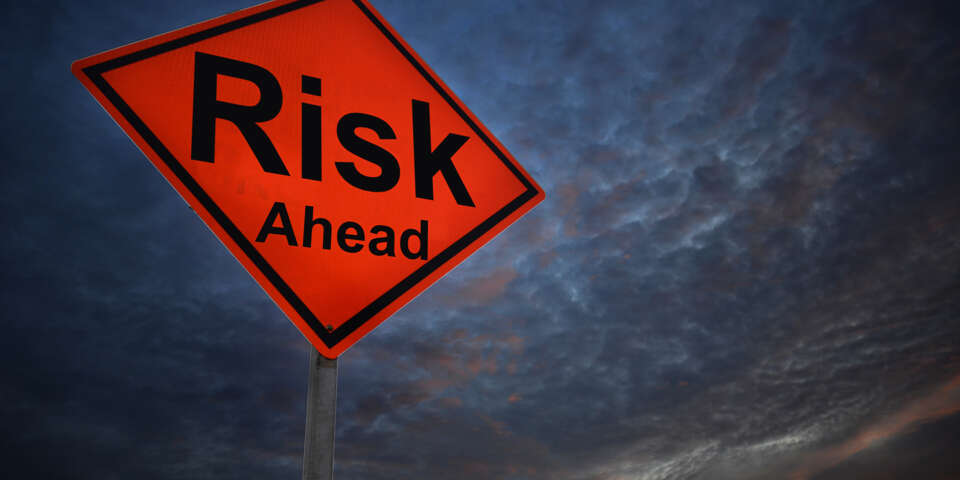 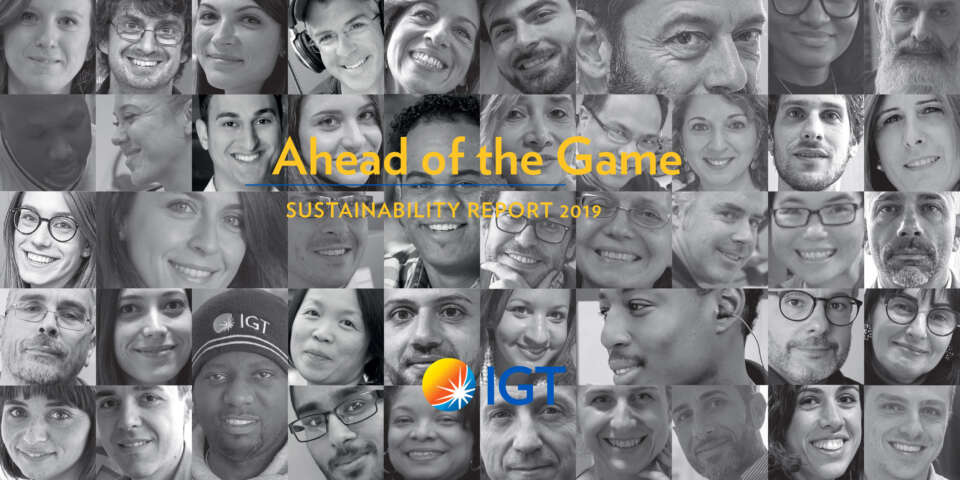 Blog | 19. Nov 2020
Staying ahead of the game in extraordinary times

The release of the 13th annual IGT Sustainability Report continues the company’s longstanding practice of reporting transparently on its efforts to advance the goal of socially responsible corporate citizenship.